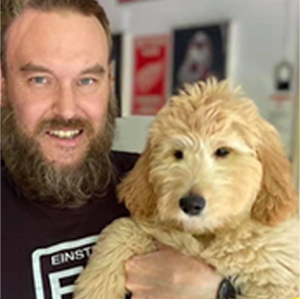 As they say… “the show must go on,”… and middle school orchestra teacher David Sowerby did just that, despite his chronic medical issues. He was an inspiration to his students at Kraft Meadows Middle School, giving it his all, despite the challenges he was facing.

In 2021, David was nominated by his school for Norwegian’s Giving Joy Contest 2021 and won the Second Grand Prize. A $15,000 donation from Norwegian Cruise Line, which was put towards new instruments for the orchestra and band programs at the local Caledonia, Mi. middle school.

Unfortunately, David would not be able to hear the harmonic sounds of these new instruments, as he passed away following a courageous battle against Crohn’s Disease, Primary Sclerosing Cholangitis and Colorectal Cancer. His wife, children, students, facility, and community will never forget the talented orchestra teacher who brought the sound of music to their lives.

David Sowerby is an inspirational Orchestra Teacher in Caledonia, MI. He has battled through massive amounts of health issues including ulcerative colitis, primary sclerosing cholangitis, a liver transplant, and currently a Whipple procedure for cholangiocarcinoma. David has been currently hospitalized for 65 days and until this point had taught orchestra right up until his surgery. Even during his health issues, he worked his very hardest to be an inspiration to his students, making sure that they excelled even as he fought his own medical battles. He has grown the orchestra program to the thriving program that it currently is. He was nominated as a Rockstar Teacher by his Principal and continues to be a rockstar. His plans are to return to the classroom in the fall. This prize would allow him a very deserved break from the constant medical worries and constant worry about his students, classroom, and family. While not teaching he is a cherished father of 3 – a set of 17 year old twins and an 11 year old.